The groundbreaking research enabling the targeting of oncogenic drivers, including targets like KRAS which have been challenging for decades, have driven the development of the next generation of cancer medicines but also captured the interest of oncology researchers around the world, including Mirati Therapeutics and many biotech companies within the local San Diego area. Last week, I was fortunate to speak to these advancements and emerging opportunities in personalized cancer treatments at the 17th UC San Diego Moores Cancer Center Industry/Academia Next Generation Precision Oncology Symposium.

During the one-day symposium, researchers gathered to share the latest advancements in precision oncology to further progress this area of research and provide hope for those with cancer and their loved ones. This forum was designed to foster an open discussion of scientific and medical advances while placing an emphasis on the utility of using unpublished research to accelerate data dissemination.

Hosted by UC San Diego Moores Cancer Center, this valuable knowledge exchange is another example of why San Diego has become a hub for cutting-edge science within the biopharma industry and for those who seek to push the boundaries of health care investigation. I was inspired by the progress in precision oncology treatments and the collaboration from the symposium’s participants who shared new insights on targeted treatments, immuno-oncology, biomarker testing and emerging therapeutic strategies.

At the symposium, I provided an update on Mirati’s KRAS oncology pipeline contributing to the latest cancer research showcased at the event. The complex role of KRAS mutations in the pathogenesis of colon cancer and the potential of targeting the KRAS signaling pathway through therapeutic intervention was central to the theme of the symposium. KRAS mutations have been the focus of scientific research for more than 30 years, culminating in the discovery of a KRAS binding pocket enabling the development of KRAS targeted therapies.1 This discovery has driven Mirati’s drug development program for KRAS targeted therapies, inhibiting KRASG12C as well as opportunities to target other KRAS mutant variants and other challenging drug targets.

At Mirati, we have always believed in innovation through collaboration to provide meaningful breakthroughs for patients with hard-to-treat cancers. It was an honor to discuss Mirati’s advancements in KRAS targeted therapies and the latest research occurring within the local San Diego community at this year’s symposium. I look forward to further exploring the future of targeted oncology as we seek to improve the lives of those with cancer.

Dr. Spira, a director at the Virginia Cancer Specialists Research Institute, Co-Chair of the US Oncology Thoracic Oncology Committee, and a faculty member at Johns Hopkins School of Medicine discusses why KRASG12C is a prolific problem in this Mirati-sponsored episode of the “Cure Talks Cancer” Podcast. Dr. Spira explains the science of the KRAS gene and introduces KRASRegeneration.com, a website for HCPs that builds awareness of the KRASG12C mutation. The conversation focuses on the importance of educating oncologists around the KRAS mutation in lung cancer. Listen here.

Sometimes however, a mutation can occur in one of these “genomic guardian” genes that partially degrades the cell’s ability to repair mutational damage. Such genes are sometimes called “tumor suppressor” genes because when they function normally, they prevent the development of tumors. Often, a mutation that inactivates one of these tumor suppressor genes is on the road to becoming a cancer cell, allowing the cell to accumulate more mutations in other genes, leading to the unrestrained growth and division that characterizes cancer. Cancer, then, can be thought of as a disease of genetic instability.

In recent years, with greater understanding of the many molecular events that result in the transformation of normal cells into cancer cells, therapies have been developed that target specific “driver” mutations. A good example is the G12C mutation in the KRAS gene – a key “on/off” switch that controls the circuitry of cell growth and division in response to cellular signals. While the normal KRAS protein can switch the circuit on and off depending on the signals it receives, mutations like G12C cause the protein to become stuck in the “on” position, constantly signaling the cell to replicate and grow. Cancers that are driven by the G12C mutation are a key focus for Mirati’s research. KRASG12C inhibitors can be thought of as the contrast to chemotherapy, and an example of personalized or precision medicine – a therapy designed to work only in the subset of cancers that have the KRASG12C mutation.

Many cancer driver mutations have been identified with most of them, which can be targeted, having newer generations of “precision” cancer medicines. However, there is another approach to precision or personalized medicine that also exploits the cancer cell’s genetic instability, while more efficiently sparing normal cells. Organisms often evolve redundancies in the metabolic pathways involved in critical functions (such as DNA damage repair) that if the function of one gene is lost, another can compensate and maintain cell viability.  In contrast, cancer cells develop inactivating mutations (or outright deletions) in one or more of these functionally redundant genes, rendering the tumor cell entirely dependent on the remaining “active” gene. By targeting the product of that last remaining gene, a drug can potentially be lethal to a cancer cell while sparing normal cells in which the “back-up” is still functional. This is the concept behind “synthetic lethality.”

The quintessential example of therapies designed to exploit synthetic lethality are the PARP inhibitors. PARP is an enzyme involved in the repair of single strand breaks in DNA. When PARP is inhibited, these single strand breaks accumulate and eventually become double-stranded breaks, affecting the DNA double helix. Cells with double-stranded breaks become dependent on other DNA damage repair pathways such as the homologous recombination pathway mediated by the tumor suppressor genes BRCA1 or BRCA2. Hence, breast, ovarian or prostate tumors with mutated BRCA genes are uniquely susceptible to PARP inhibitors as the combined inhibition of PARP with loss of BRCA activity eventually leading to catastrophic damage to the tumor DNA.

Another example of this synthetic lethality approach to cancer therapy is Mirati’s PRMT5 program. PRMT5 is a critical enzyme known as a “methyltransferase” that is involved in a host of essential cellular functions. Another enzyme called methylthioadenosine phosphorylase (MTAP) plays a critical role in methionine metabolism and is often missing in cancer cells because of its chromosomal location close to a commonly deleted tumor suppressor gene (CDKN2A).

Loss of MTAP in a cancer cell causes the accumulation of an intermediate called methythioadenosine, or ‘MTA.’ MTA is a partial inhibitor of PRMT5, therefore MTAP-deleted cells are profoundly sensitive to further inhibition of PRMT5 thereby setting up the context of vulnerability to synthetic lethality. This enhanced sensitivity to PRMT5 inhibition creates a large “therapeutic window,” in which doses of an inhibitor that are harmless to normal, MTAP positive cells, are lethal to MTAP-deleted cancer cells. Mirati’s PRMT5 inhibitor is designed to selectively bind PRMT5 in MTAP-deleted cancer cells in a novel way, and positioned to potentially have an improved therapeutic index based on the concept of synthetic lethality.

As is the case for inhibitors of G12C mutant KRAS tumors or PARP inhibitors in BRCA mutated cancers, a PRMT5 inhibitor drug is effective only in tumors with a homozygous MTAP deletion – which occurs in about 10 percent of all human cancers. This is another example of a ‘personalized’ or ‘precision’ approach to therapy that will only be active in an identifiable subset of cancer patients.

The promise of delivering on personalized medicine relies on suitable diagnostic tests (i.e. companion diagnostics) to identify patients who may benefit from targeted therapy. This is an important area of focus at Mirati and of the Translational Medicine team.

Cancer expert, Melissa Johnson, MD, discusses the elusive KRAS target and the importance of providing patients choices that can offer sustained targeted inhibition. Watch more of her discussion below.

As a scientist, I have a unique opportunity to participate in advancing targeted oncology into a meaningful and highly impactful area of scientific development. Today, there are more than 50 FDA-approved targeted drugs for cancers with known driver mutations, and research advances are rapidly increasing the options to target cancer mutations.2

One important first step in identifying cancer drug targets and developing targeted therapies is to understand the underlying genetic basis of cancer causation and progression at a molecular and cellular level. The genomic era in cancer research has ushered in a principle called “oncogene addiction.” Oncogene addiction is defined by the dependency of certain tumor cells on a single activated oncogenic protein or pathway to maintain their malignant properties, despite the presence of multiple mutations that contribute to tumor progression.3 In other words, we are trying to identify a cancer drug target gene or protein that acts as the Achilles’ heel of each cancer. Some targets are more difficult to drug than others–it took close to 4 decades from the initial discovery of KRAS before the first drug candidate showed promising clinical efficacy in a subset of patients with KRAS-mutated cancers.4 This showed us that, while difficult, targeting KRAS wasn’t impossible.

At Mirati, our scientific discovery and preclinical research seeks to understand the KRASG12C mutation on a holistic level with the purpose of better understanding its pathway, lifecycle and potential resistance mechanisms. These insights have informed our initial drug design strategy and will continue to influence our clinical development strategy toward optimizing the potential clinical benefit to patients. Our research in KRASG12C has also led to important and exciting learnings in other areas of KRAS, including KRASG12D. Our science-driven focus on drug discovery and development is based on the principle that all aspects of the mutation and cancer biology need to be understood and targeted with precision.

The targeted oncology landscape is rapidly evolving, and the development of these therapies has dramatically changed the way we approach discovery and research.2 There is still much more to address, including drug resistance mechanisms and finding better sequential therapies or combination.

In many ways, oncology research and development is leading the way toward the promise of patient-centric, personalized medicines, and I anticipate we will be at the forefront of this research with the goal of developing targeted therapies across many difficult to treat cancer mutations.

About one-quarter of patients with non-small cell lung cancer (NSCLC) have a KRAS mutation, and G12C mutations make up about 14 percent of them. KRASG12C mutations are also found in many other difficult to treat cancers, and are historically associated with poor prognosis.2,3 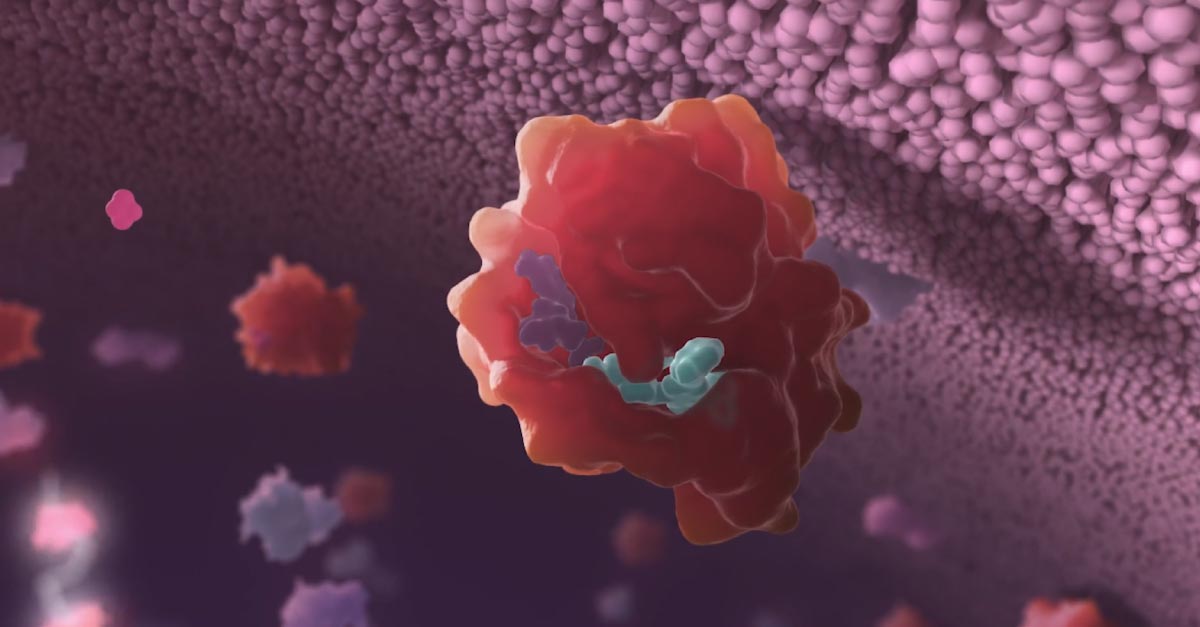 “Despite advancements in the treatment of cancer, patients with a KRASG12C mutation are still in need of a targeted treatment with improved responses and sustained durability,” said Joseph Leveque, chief medical officer, Mirati Therapeutics, Inc. “KRAS mutations are found in an aggressive subset of cancers that have minimal treatment options.  Although first generation KRAS inhibitors bind to and irreversibly inhibit the KRASG12C mutated protein, it is an underappreciated observation that new KRASG12C proteins regenerate every 24-48 hours. Thus, continuous drug levels and persistent inhibition of the KRASG12C mutant protein is needed to achieve maximum antitumor activity.”

Leveque continued, “It’s not enough to just turn KRAS mutants off transiently. The good news is the science is still evolving and new research may shed light on how to further optimize targeting these mutations in difficult to treat cancers.”

Despite advancements in the treatment of cancer, patients with a KRASG12C mutation are still in need of a targeted treatment with improved responses and sustained durability

Mirati launched KRAS Regeneration — a healthcare professional campaign in part to raise awareness of the KRASG12C mutation and what is needed to overcome the insidious nature of the mutation.